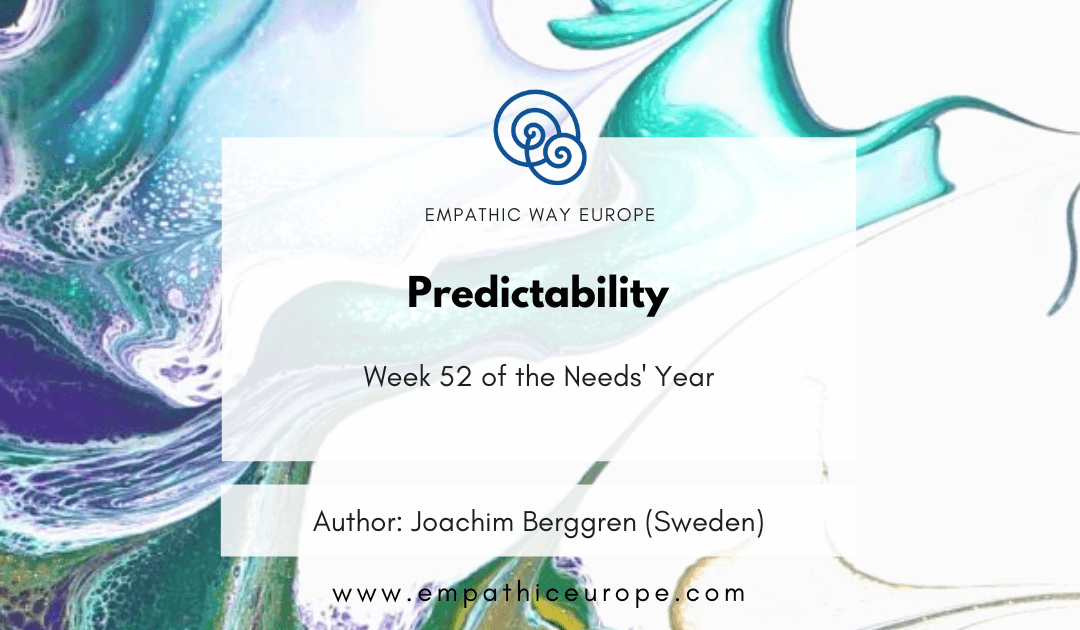 I heard sirens in the distance. Then I saw the square and blue lights from a couple of police cars. I paid no direct attention to it and kept on running. When I came back to the apartment, my partner had just returned home from a dinner in central Stockholm with her friend from Poland.

I googled the news and read that there had been a shooting in the centre of Rågsved, a couple of minutes walk from where we live. We figured out that Magda and her friend must have passed that place between the shooting and the arrival of the police. We looked at each other in disbelief and thought about what could have happened if they had passed it just a few minutes earlier.

This incident happened a few months ago and was a reminder of how important it is with security and predictability. For me, predictability is a form of control – control in form of what I can expect when I do certain things. If I couldn’t foresee the likely results of my actions, life would be chaotic, fragmented and full of unsynchronised events. There are a lot of things I can’t predict, but when I think about my life, most of it is pretty predictable.

I know the likely end result when I start chopping vegetables and turn on the gas flame under the pan. When I get in the car on my way to work, I expect that one way or another I will arrive at my destination. After I put on my shoes and start running, I look forward to coming home, relaxing and taking a shower. It is because my world is relatively predictable that I take the initiative to do these actions.

If the expected outcome of my actions was not predictable, I don’t think I would make the effort to carry them out. For example, if there was only a 20 per cent chance that my cooking would result in a meal, I guess I would do something else to meet my energy and nutrition needs. After ending up in all sorts of different destinations, I probably wouldn’t continue to run or work at my workplace. I need predictability to function in a complex society.

When we lived as hunters and gatherers in a stable climate, we didn’t need such a long planning horizon. As my ancestors moved north and the seasons began to change between hot summers and cold winters, planning became more important. Especially when we became permanent residents and started to farm the land, predictability became vital. If we didn’t grow crops during the warm months, we wouldn’t have anything to eat during the winter. Without my ancestors’ ability to predict, I would most certainly not be sitting here today writing this text.

When speaking with various NVC trainers, I have often been told that control and predictability are not needs. Several of them have said that they instead are strategies to meet other needs such as safety and order. I see predictability as a prerequisite for a functioning society. Society would not function without a concept of cause and effect.

As I’ve written in previous blog posts in the frame of this project, the words we use to name our needs are social, cultural and linguistic agreements. The words “food”, “nutrition” and “hunger” do not exist outside the human mind. However, all creatures need some form of energy to sustain life. If we agree that a specific word represents a universal human need, then it is a need. The word itself is just a fabrication that we agree upon. The essence of the need is what is alive in us. Our life force exists within and between us regardless of which words we choose to describe it.

I have deliberately chosen the word predictability instead of control. To me, the two words point towards the same need. However, the word control is often used to describe attempts to dominate and oppress people. It easily brings to mind hierarchical and dysfunctional relationships and social systems. To make things a little easier for the reader, I have therefore chosen the word predictability.

I love both predictability and unpredictability. To me, they are two sides of the same coin. I can’t imagine a life without them. The fact that my life is largely predictable creates room for adventure and spontaneity. Without predictability, I would not be able to enjoy various unforeseen events and moments in my life. It is a foundation for a great life.

What does predictability mean to you?

Leave a comment below or, if you are a Premium subscriber of “The Needs’ Year”, at the online platform: https://empathiceurope.com/online/courses/the-needs-year/modules/week-52/

On 28 December at 19:00-19:45 CET, you can participate in a Zoom Talk with me and Hugo Roele. We will talk about the need for Predictability.

Sign up for the Needs’ Year and you will receive a link to Zoom.

If you read this afterward, you can watch the recording when you become a premium subscriber. Check the details HERE.