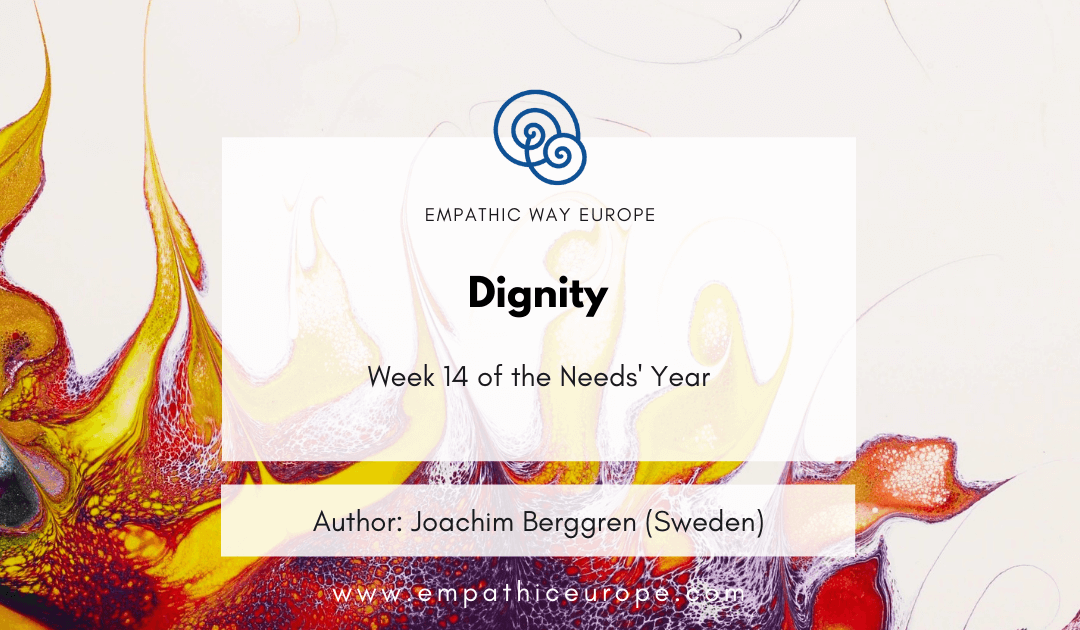 “Damn it, Jocke! You’re the best friend I have. I love you!” My friend was very drunk and I was a sober person during that period of my life. I felt embarrassed and mumbled something in response, trying to avoid the discomfort. He obviously wanted contact and I myself had a hard time looking into his eyes. To my relief, he soon staggered away and I could shake off the discomfort.

When he was sober he did not express himself in this way. And still today when I think about it, I experience a creeping feeling in my body. I got lots of thoughts and judgments about him: “He was false and made a fool of himself. If he meant what he said, he was a coward who could only say it when he was drunk. He was sentimental and pathetic…” I think that a lot of what I experienced have roots in the need for dignity.

When dignity is not met

As in the example above, I think I have the most contact with the need for dignity when it is not met. When others behave in a way I consider degrading them. Or when I experience that I do not live up to others’ or my own expectations of myself. Feelings of guilt and shame flow through my body, reminding me of my need for dignity.

My need for dignity is activated when I see others in exposed situations. It can be people who ask for money, people who don’t seem to have a home or people who seem to be heavily addicted to alcohol or other drugs. Often a morally judgmental thought about these people arises in me, which is quickly followed by a feeling of shame: “How am I able to think like this about a person in such a vulnerable position?!”

I think most of us want to live in societies where we take care of each other and where we all have the opportunity to live a dignified life. We want to consider ourselves as members of a just society. And when we see fellow human beings who do not seem to have their basic needs for protection, security and respect met, we think it’s unjust. We might get feelings of shame. This condition is so unpleasant that we do anything to avoid it. One way of trying to avoid shame is to express contempt.

When I think of dignity as one of the basic human needs and look around, it seems that many are struggling to meet it. It may be people who are forced to take low paid jobs in order to earn a living. Or groups that live under the domination of other groups in different ways, such as people who are not citizens of a country they call their own. Dignity seems to be linked to other needs such as integrity, respect and autonomy.

If I am going to try to recall some examples where the need for dignity can be met, I’m reminded of situations when I have accomplished something. It can be an education or an endurance race I have participated in. When I think of others, I get images of people who fight against injustice even though it has consequences for their own lives. A couple of examples are Martin Luther King and Malala Yousafzai.

While writing this blog post, I got inspiration to find more strategies to satisfy my need for dignity. Not just to discover the need when it’s not met or to experience it met in grand moments. Maybe I already meet the need from time to time in my everyday life without being aware of it? If I pay attention to it I might detect it and be filled with it in a more conscious way?

How do you meet your need for dignity?